You are here: Home / Books To Read / Epicentre by Chris Andrews 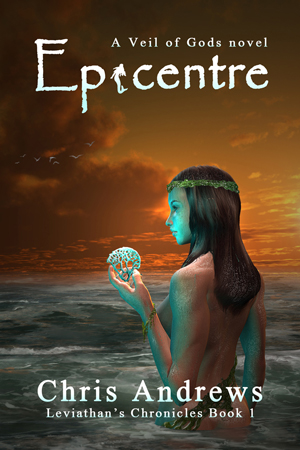 Can a naïve mermaid prevent a world-wide war among magical Creatures?
When Grace balks at taking yet another life to ensure her own survival, she accidently loses the necklace storing the last of her magical lifeforce. Suddenly desperate for the lifeforce she failed to steal and with nothing held in reserve, she must recover her necklace before sunset or be forced to drown another victim. If she doesn’t she’ll die, and she only has minutes left. Determined not to kill until she absolutely has to, Grace makes a regrettably hasty promise to regain her necklace, not realising the promise will expose a secret other magical Creatures would kill for. With her own life and those of her sisters at stake, Grace is forced into a desperate fight to save her kind from the malign intentions of a succubus and her cohort of ghouls, all determined to do whatever it takes to control her abilities. If she fails, mermaids will face a war they cannot win. Epicentre is the first book in the Leviathan’s Chronicles series, expanding on the epic Veil of Gods story universe. It stands alone even as it sets up the bigger story, so dip your toes into an unseen world of magical Creatures right now.

Author Bio:
Chris Andrews embarked on his writing career while under the blissful ignorance of youth, when he thought writing a successful book was as simple as reading one. It turns out it’s not quite that easy. His novels have been shortlisted in both the QWC/Hachette and Varuna/HarperCollins Manuscript Development Programs. His first novel was accepted by an agent and publisher, but true to Murphy’s Law the publisher folded and the agent left the business. He has since learned a lot about self-publishing. Being a writer, it’s traditional to have cats, but his dogs thought that was a stupid idea.