You are here: Home / Books To Read / Empire of Mars by Stephen Darnell 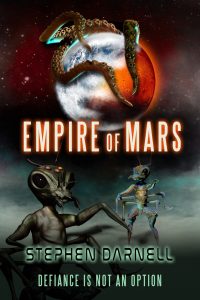 About Empire of Mars by Stephen Darnell:

On ancient Mars two races coexist uneasily. The Martian god-Emperor is never seen in person, but when the horrific truth behind the source of imperial power is uncovered, a massive deception is revealed.
65 million years in the future astronauts from Earth locate a strange artifact on the surface of the Red Planet, providing a link with its distant past. The discovery will change people’s view of Mars forever, and pose a growing threat to both the mission and the lives of the isolated band of pioneers themselves.

Author Bio:
Steve lives in rural Oxfordshire, England, with his wife Sarah, and golden retriever, Evie. Being awarded a fifteen-yards swimming certificate at age nine, and a prize book token for writing an essay about the Sun at secondary school, were life changing moments. These achievements led to a degree in Maths and Astronomy, and a fulfilling career in teaching and lecturing.
Steve has had a lifelong passion for all things space related and has thoroughly enjoyed writing his first novel ‘Empire of Mars.’ He is currently working on the sequel.