You are here: Home / Books To Read / Emma and the Minotaur by Jon Herrera 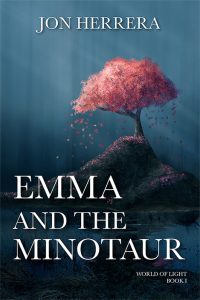 Emma and the Minotaur by Jon Herrera

A world of magic, secrets, and creatures of legend returning from exile. Emma and the Minotaur is a modern-day fairy tale and a love letter to innocence and fantasy.

In the forests of Saint Martin, a great power has awakened. Whispers abound of a monster who lurks in the dark as more and more of the city’s residents go missing.

Emma Wilkins is eleven years old and lives on Belle Street. Early in the school year, Emma befriends a boy whose father has disappeared. Together, they embark on a mission to find him. Awaiting Emma in the shadows of Glenridge Forest is a world of magic, secrets, and creatures of legend returning from exile.

During her adventure, Emma discovers the truth behind a power greater still. One who watches and waits, preparing for the day when the world is ready for his return.

Author Bio:
Born in El Salvador during the civil war, Jon Herrera immigrated with his family to Ontario, Canada at the age of eleven. Settling in the Niagara Region, Jon attended university, graduating with a degree in Physics and Mathematics. He has always had a keen interest in creativity in its many forms. His writing is the result of a love for fantasy and science fiction. A long time sufferer of anxiety and depression, Jon uses his perspective and experiences to ground his work. He now lives in Western Ontario with his partner and two loving cats.