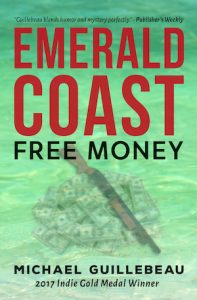 Honest Lizzie Borden has never in her life taken a thing that didn’t belong to her. But now the Florida swamp girl/budding rock star (robbed of her music by a record company) has two million dollars, a dead mobster, a live amateur mobster who wants his money back, a detective she’s falling for—and a chance to get her music back. On Florida’s beautiful—and bizarre—Emerald Coast, anything can happen. Especially the things you don’t want.

Author Bio:
Publishers Weekly said “Guillebeau blends humor and mystery perfectly…” Michael Guillebeau’s book MAD Librarian (Madison Press, 2017) won the Foreword Reviews Gold Medal for Humor Book of the Year and the 2019 Readers’ Favorite Bronze Medal for Humor. His first novel, Josh Whoever (Gale/Five Star Mysteries, 2013) was a finalist for the 2014 Silver Falchion Award for Best First Novel: Literary Suspense, received a starred review in Library Journal, and was named a Debut Mystery of the Month by Library Journal. Guillebeau has published five novels and over twenty short stories, including three in Ellery Queen’s Mystery Magazine. His work has been featured in the anthologies, The Anthology of Cozy Noir, We’ve Been Trumped!, Eight Mystery Readers You Should be Reading Now, and Not Just Rockets and Robots.
Michael Guillebeau lives in Madison, Alabama and Panama City Beach, Florida.