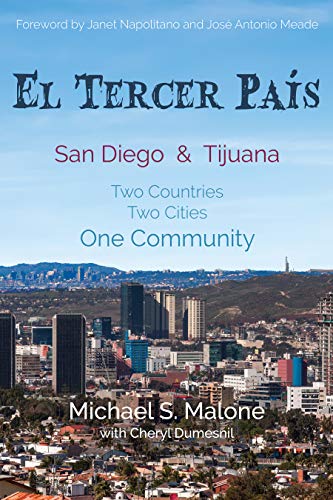 Two of the most important cities in North America are so physically close they would touch were they not separated by a wall at the US-Mexico border. El Tercer País tells the story of Tijuana and San Diego for the first time—an unforgettable tale of war and peaceful cooperation, dependency and shared destiny, exploitation and amity.

Buy the book, and follow the author on social media:
Get This Non Fiction Book From Amazon.
Visit the Author’s Facebook Fan Page.

Author Bio:
Michael S. Malone is one of the world’s best-known high-technology/business journalists. He is the author or coauthor of nearly thirty books, including such award-winning works as The HP Way, The Intel Trinity, and The Virtual Corporation. He has also been the host or producer of several public-television series (notably the award-winning PBS miniseries The New Heroes), editor of Forbes ASAP magazine, and is Dean’s Executive Professor at Santa Clara University. He is a Distinguished Friend of Oxford University. Malone lives with his wife and younger son in Sunnyvale, California. –This text refers to the paperback edition.