You are here: Home / Books To Read / Eagles in Flight by Ramcy Diek 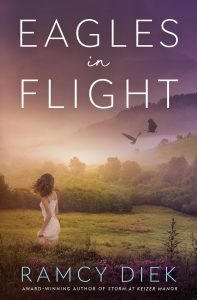 Eagles in Flight by Ramcy Diek

Eagles in Flight, a romantic suspense novel from the award-winning author of Storm at Keizer Manor.

Be like the eagle in flight that soars above the troubles of the world.

Emma’s life changes the day Ruben Templeton walks in and asks her out on a date. Over dinner, Ruben’s undivided attention flatters her and she’s a little disappointed when his best friend, Jesse Kimball, joins them. Jesse is a senator’s son who just announced his candidacy for mayor.

Accustomed to a quiet life, insecure 27-year-old Emma is hesitant but excited when Jesse calls her the next day to invite her to his birthday party.
It doesn’t take long for Jesse to sweep her off her feet and when Emma receives devastating news, he asks her to marry him. From the moment she agrees, their relationship starts to deteriorate. Hurt and confused, Emma turns to Ruben for advice.

Ruben suggests the young couple to give each other space for several weeks. Weeks Emma can use to help him locate his younger brother Axel, who has gone missing.
Emma agrees, and soon finds herself on a road trip across the country.

Will Emma and Jesse’s temporary separation clear the distance between them, or will she find love in the arms of another man?

Author Bio:
Ramcy Diek fell in love with the United States during her travels with her husband. Together, they visited all the northern states and landed in California where they resided for five years.

Circumstances took them back to The Netherlands, only to find out they both missed the United States. They packed their bags and crossed the Atlantic Ocean once again. This time, the Pacific Northwest became their new home, where they built up their business and raised their two sons.
During this time, Ramcy also made a slow transition from reader to multi-genre writer. Her debut novel “Storm at Keizer Manor” received multiple awards. This inspired her to spend more time doing what she loves most: writing stories.

Eagles in Flight, a political romantic suspense novel, is her second novel,
Her third novel Overland, a dramatic thriller, is published in November 2020 and will soon be followed by many more.