You are here: Home / Books To Read / Dr. Increase by Trana Mathews 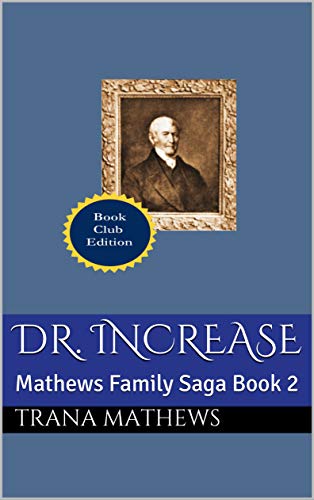 These early Americans were fundamental to the expansion of the United States after the Revolutionary War. Based upon a diary transcript and known facts, Dr. Increase is the sequel to The Mathews Family and the second novel in the Mathews Family Saga.

When Increase finished his medical apprenticeship, two physicians had already established practices in New Braintree, Massachusetts. Increase has always dreamt of owning land but now can’t save money for a future purchase. He wants to marry but doesn’t have the means to support a family. Some of his relatives have settled in the Ohio frontier, so he decides to travel to the Northwest Territory in 1798 to visit them and to view its opportunities.

Dr. Increase Mathews recorded his thoughts in a journal, noting mileage and expenses along with people, places, and complications encountered. It was not an easy trip. Traveling hundreds of miles by horseback took weeks to accomplish, and a companion’s mare is injured traversing a difficult mountain trail. This 18th century man’s actual words provide a remarkable insight on this period of early American history.

Author Bio:
Trana Mathews is my pen name. There is already an author named Diane Hildebrandt who writes technical reference books, so I decided to use my mother’s family surname. Besides, I think Mathews is easier to spell than Hildebrandt. While I was searching for an “old-fashioned” first name to go with the Mathews surname, a very dear friend suggested, then gave me permission to use her grandmother’s name.

After I retired, I moved to beautiful southeastern Arizona and began writing about my third great-grandfather, because his life had always fascinated me. My original plan was to start with his diary of a journey from Massachusetts to Ohio in 1798. Further research led to my discovery of actual letters written between family members which are contained within Marietta College’s Legacy Library. My focus shifted to his entire family.

Because of my research of Massachusetts birth, marriage, and death records, I found many genealogy sites had misinformation, so I became a WikiTree genealogist. This helped me organize where I’ve found my information!

I’m a confirmed “bookaholic”. Yes, I do know the proper term is bibliophile. But, it seems to me, words with the -phile suffix have a sinister connotation. I’m a firm believer in promoting literacy and am an active member of Friends of the Huachuca City Library.

I’m a member of several writing groups and am involved with my community. In my spare time, I enjoy reading, crafting, and playing cards. While cribbage is my favorite game, dirty board (also known as pegs & jokers) is a close second.

My novels are 18th century historical fiction based upon known facts about my ancestors. Dr. Increase is the second novel in this family saga trilogy.