You are here: Home / Books To Read / Decline (Declan Reede: The Untold Story #1) 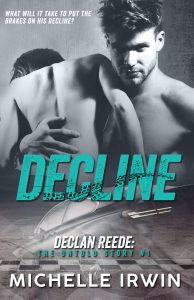 Four years ago, Declan Reede chose race cars over romance to follow his dreams. Foul-mouthed and as known for his bedroom antics as his performance on the track, his life was better than he’d imagined it could be.

But that was before Queensland Raceway… Before the chance sighting of the girl he left behind.

The idea of her in another’s arms threatens everything Declan has worked toward. Haunted by what might have been, he’s unable to return to his carefree lifestyle. With six crashes from six starts, his career is racing downhill faster than his V8 on Mount Panorama.

To put the brakes on his decline, he must get her out of his head. But how can he once he discovers she’s hiding the mother of all secrets and there’s more at risk than just his reputation?

Find out more in this second chance romance filled with hope and hurt mixed with a unique Aussie flavour.

Author Bio:
Michelle Irwin has been many things in her life: a hobbit taking a precious item to a fiery mountain; a young child stepping through the back of a wardrobe into another land; the last human stranded not-quite-alone in space three million years in the future; a young girl willing to fight for the love of a vampire; and a time-travelling madman in a box. She achieved all of these feats and many more through her voracious reading habit. Eventually, so much reading had to have an effect and the cast of characters inside her mind took over and spilled out onto the page. Michelle lives in sunny Queensland in the land down under with her surprisingly patient husband and ever-intriguing daughter, carving out precious moments of writing and reading time around her accounts-based day job. A lover of love and overcoming the odds, she primarily writes romance.