You are here: Home / Books To Read / Deathless 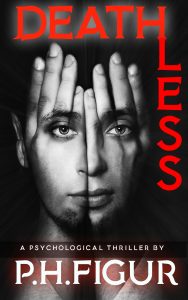 Alex Hansen’s son Robert returns home, three years after being kidnapped, and finds out terrorists have programmed his son to carry out a deadly mission, forcing Alex into a race against the FBI to stop Robert before he commits mass murder.

Author Bio:
P. H. (Peter) Figur grew up in Massapequa, a small New York town located on Long Island in the southeast corner of Nassau County. After graduating from C.W. Post College, he spent the next 35 years working in the accounting/auditing field for three multi-national companies. In 2013, Peter started writing a daily journal recapping daily events, capturing thoughts, and documenting opinions. That morphed into short stories about his travels around the world to over 30 countries and his passion for music and sports. He even wrote a hockey blog one year covering his beloved New York Islanders. But the more Peter wrote, the more it drove him towards an even more significant project, to start writing an autobiography entitled “Life Sentence”, which is still a work in progress. Peter has self-published three novels: “The New America” which is a political thriller which takes place in the future in 2045 after WWIII; “The Divinity Complex”, a psychological thriller about a female serial killer whose gender is hidden until the end of the story; and, “Killen” which is a domestic suspense story about two brothers, one of which kills their parents and tries to pin the murders on his younger brother. Killen was based on a short story entitled “Brother Henry” which received an honorable mention award from Writer’s Digest. All three novels can be found at www.phfbooks.com. After so many years, Peter finally found his passion. Some would say it’s a shame to find your passion so late in life. But if you asked Peter, he would tell you that wasn’t true. “You can’t look at life that way. It’s always better to find your passion late in life, then never finding your passion at all.”