You are here: Home / Books To Read / Crystal’s House of Queers by Brooke Skipstone 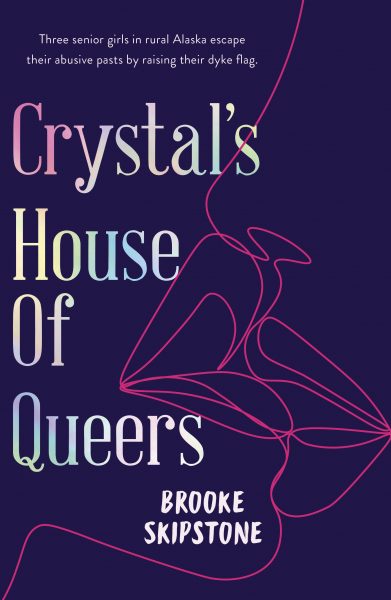 Three senior girls in rural Alaska escape their abusive pasts by raising their dyke flag for themselves and their community.

Crystal Rose woke up at three in the morning today, drenched in sweat and breathless after another sex dream with Haley Carson. Later at school in the tiny town of Clear, Alaska, Crystal saves Haley from an assault by her abusive boyfriend.

The two girls renew a love started years ago that had to stay hidden until now. But with Crystal’s grandparents in the hospital with Covid and the possibility of her drug addict parents returning from a 14-year absence, Crystal needs Haley as much as she needs Crystal.

They connect with Payton Reed, a gun-toting artist who helps them feel proud to be gay and willing to stand up to anyone. Together they struggle to make Crystal’s house safe for those who are hated for their love.

Author Bio:
Brooke Skipstone is a multi-award winning author who lives in Alaska where she watches the mountains change colors with the seasons from her balcony. Where she feels the constant rush toward winter as the sunlight wanes for six months of the year, seven minutes each day, bringing crushing cold that lingers even as the sun climbs again. Where the burst of life during summer is urgent under twenty-four-hour daylight, lush and decadent. Where fish swim hundreds of miles up rivers past bear claws and nets and wheels and lines of rubber-clad combat fishers, arriving humped and ragged, dying as they spawn. Where danger from the land and its animals exhilarates the senses, forcing her to appreciate the difference between life and death. Where the edge between is sometimes too alluring.

Crystal’s House of Queers is her third novel.