You are here: Home / Books To Read / Colony Book One: The End 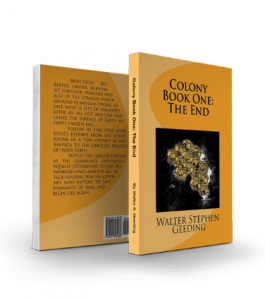 About Colony Book One: The End:

Synopsis
Colony Book 1: The End
Steve Reeding is a country lawyer and beekeeper. He watches his bees plus every other bee on Earth disappear, not just die, gone. The world can’t feed Third World countries anymore, let alone themselves. Have-nots pour out of communities looking for food, borders close, war ensues. Ultimately, after two years, nuclear conflict erupts around the globe. After the firestorm, nuclear dust cuts off all sunlight. Earth becomes a giant ball of ice, freezing every living thing on the surface. It will be ten years until the thaw.
In the two-year window, Reeding, also a survivalist, prepares a cave for the coming end. As the first bomb strikes, Reeding, with his extended family, close the reinforced door for the final time. They have a six-month food supply. As food dwindles, Reeding enters an unknown portion of the cave. He searches for either food or death. Finally, Reeding collapses. When he wakes, he is a prisoner of great creatures led by their queen, Queen Z. These beings learn Reeding’s language within an hour. Much to his chagrin, Reeding finds they are called Guardians, and they are more intelligent than himself. He learns these Guardians are the Creator’s own, designed to help safeguard all of Earth’s wonders, man included. Reeding’s clan is taken to a different place, the Colony, until the thaw.
Unfortunately, Earth’s demise occurred once before, when Earth drowned. In this time period, the Creator made Guardians, giving to all thirteen queens a superior intelligence to pass to each successor queen. Darkness came into cosmic existence as the mirror opposite of creation. Before first Earth drowning, Darkness mentally reached out from a dark cavern of the world’s center, ensnaring one queen’s mind, Queen Zur, altering it to become a tool used for evil. She then corrupts one man, a leader of first Earth’s wonderful creations. Thirteen underwater cities, the first people of the Creator, are in danger. Battles are fought for supremacy, good and light against darkness with evil. In time, the renegade queen Zur is banished to the center of the Earth forever. There, she will be guarded for eternity by faithful Guardians. Unfortunately, her influence on that one man set off a chain of destruction, drowning Earth’s surface. Then, as now, the Guardians protected Earth’s wonders to restore life when waters receded.
Our nuclear bombs created an unknown crack in the renegade queen’s prison, allowing her a long-awaited escape. Now freed, she attacks human survivors living in colonies of the current Guardian queens with a vengeance, alerting them to the truth of her existence. Knowing the danger they are up against, Queen Z must tell Reeding what she knows of his ancestors, more particularly of Nui, who was a beekeeper during the time of the first Earth’s death. In turn, Reeding agrees to travel through the Earth, through time itself, to try to find his ancestors to discover any weaknesses of the renegade Queen Zur that might help them now.
As the journey begins, war rages, old enemies battle. One has ancient dark secrets of war to wield. The others possess Reeding, a single puny human, and the odds seem a bit uneven. Reeding has no choice, as very few remaining humans slumber in hidden colonies, including his family. What will the future, or rather the past, decide? Does man inherit the Earth once more, or is Darkness destined for victory?

Author Bio:
Walter Stephen Geeding comes from a family of law-enforcement professionals. His father – was FBI; his great-grandfather – former City Marshall of Lanagan in McDonald County; his nephew – a detective in Newton County, MO, is now an instructor of criminology. 1999 through 2006 saw Steve serving McDonald County, Missouri as Elected Prosecutor. In 2007 he opened his solo law firm, W. Stephen Geeding, Attorney at Law, LLC. Steve was born in Washington D.C., but raised in southwestern MO, where his people and his roots are. He attended Missouri Southern State College, before going on to receive his Juris Doctorate in 1996. Steve is former president of Newton/McDonald County Bar Association, the River shares Committee, CRP Committee and Adult, Juvenile, and Family Drug Court. Currently, Steve is a member of Missouri Association of Criminal Defense Lawyers, Missouri Family Law List Serve, a lifetime member of the National Rifle Association and the North America Hunting Club.

Steve has resided in McDonald County for the last 33 years with his wife Linda. Their blended family has 6 children and 14 grandchildren. He has written and published a trilogy of fantasy and time travel, with a creational theme, based around actual events happening on Earth today. He has published a small book of Christmas poems and short stories. Steve is editing a fifth book, set in 1822 New Mexico, the first in a new fictional series of time travel, is working on the second book in that series, and is attempting to format a full volume of poetry amassed over the last thirty plus years. He has also finished a children’s book, which is currently being illustrated.

Steve’s logo is the word Solitaire, in his words “a diamond in the rough.” Why Solitaire you might ask and his reply would be: Solitaire is my life, my logo. It is best explained by this: Born in Washington DC to an FBI agent, I moved back home to Missouri at an early age, grew up, married, more than once, raised my kids and bought a place on the river I named Solitaire. It has kept me sane and is truly my diamond in the rough.