You are here: Home / Action & Adventure / Children of Avalon by Christopher Drake 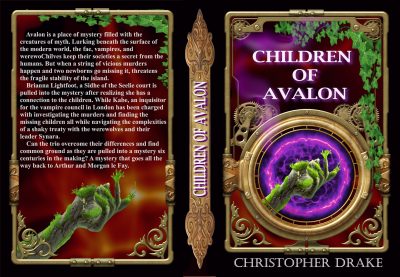 Children of Avalon by Christopher Drake

Avalon is a place of mystery, filled with the creatures of myth. But when a string of murders happen and two newborns go missing, it threatens the fragile stability of the island. Brianna Lightfoot, a Sidhe of the Seelie court, is pulled into a mystery after realizing she has a connection to the children. While Kabe, an inquisitor for the vampire council in London, has been charged with investigating the murders and finding the missing children, all while navigating the complexities of a shaky treaty with the werewolves and their leader Synara. Can the trio overcome their differences and find common ground as they are pulled into a mystery six centuries in the making? A mystery that could have ties that go all the way back to Arthur and Morgan le Fay.

Author Bio:
Christopher Drake hails from the shores of a land far away, out of sight from human eyes and ears. He is an aspiring author that spends his days recording the strange nature of humans around the world and his nights trying to find the lost gateway to his realm. For years now he has aspired to be an author and has finally finished the daunting task of writing a novel that mixes the hidden worlds he grew up in with the strange realm that humans reside. He often finds it strange that humans walk around with their familiars stuck to their ears, talking to them and hoping that they don’t die or run out of juice but to each their own. For today, sit back and let your imagination go wild and check out his new book.