You are here: Home / Books To Read / Chasing the Prophet by Orson B. Wolf 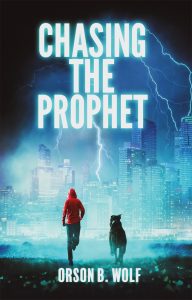 About Chasing the Prophet by Orson B. Wolf:

As the fear of nuclear attack becomes more real than ever, the key to saving everyone’s lives lies in the courageous relationship between a shy teenager and his loyal dog.

Our planet is on the verge of World War III and a cloud of paralyzing fear is drifting in the air.

While the leaders of the free world try to find a solution to the continuing crisis, the voice of The Prophet—a mysterious figure that has gathered momentum in the last few years—becomes increasingly louder.

The lives of thousands have already been saved thanks to his appearances in the media during which he issues timely warnings against natural disasters and dangerous events.

Within an already unstable security situation growing worse due to a deepening recession, an unemployed detective named Paul McBride is invited for a job interview. Paul suspects someone senior is behind this offer, perhaps even the prophet himself. The task given to Paul seems too easy: to follow a shy, introverted high school student named David who is always escorted by Max, his dog.

Soon the investigator finds out the young man is hiding a dark secret of far reaching consequences.

When David’s secret is discovered by evildoers, he finds himself with his back against the wall, forced to demonstrate incredible courage in order to save himself, his loved ones, and the entire human race. But… will that suffice?

Author Bio:
Orson B. Wolf is a writer, a copywriter, a social network content editor and a digital marketing specialist. But above all, he is known for his pro animal rights activities, focused mainly on dogs.

For over 20 years his professional skills and passion for animals have gone hand in hand, even leading him to set up Israel’s first homeless pet publication website. As a volunteer with the S.O.S Pets Society, besides arranging the rescue and adoption of dogs, he has personally cared for at least thirty more in his home.

Being an avid fan of science fiction books, it is no wonder his first published novel is an original Sci-fi thriller about a high schooler who spends his time on the internet, in the company of his beloved canine companion…

Orson holds a bachelor’s degree in Visual Communication from the Tel Aviv University and is a certified teacher. He has subsequently graduated from numerous programs in the fields of screenwriting, copywriting, website design, webmaster and campaign management. His clients are well-known Israeli companies.

His motto flows throughout his works: “Use your mind to influence the heart.”