You are here: Home / Books To Read / Betrayal of Faith by Mark M. Bello 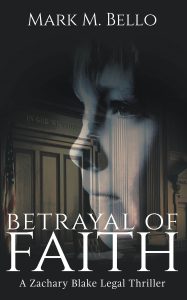 CAN ONE HAVE FAITH WHEN FAITH ITSELF IS CORRUPT?

SPOTLIGHT meets THE FIRM meets THE VERDICT in this Award-Winning first installment of the Zachary Blake Legal Thriller Series . . .

Zachary Blake—once Detroit’s King of Justice, his partners stole his practice—his wife kicked him out and took everything. He spends his time getting plastered at the local strip club or hustling traffic cases. Things are about to change . . .

The Coalition—the church’s super-secret organization whose leader will stop at nothing to protect it. Will these evil actors thwart justice once again?

Jennifer Tracy—a woman of deep faith and grim determination whose children have fallen victim to a vicious predator. Will the unconscionable evil of The Coalition victimize Jennifer and her boys a second time?

The three converge in Detroit for the trial of the century.

This compelling and realistic courtroom action drama spins a web of greed, power, and unspeakable acts of betrayal—will victims and perpetrators get the justice they so richly deserve? Bello keeps you guessing until the jury speaks in this controversial first Zachary Blake Legal Thriller.

What readers are saying about Betrayal of Faith:
***** “One of the Best I’ve Read This Year.”
***** “Great Legal Thriller Candy for those that miss Old John Grisham.”
***** “Poignant, heartbreaking, relevant, and redemptive. Not one to miss.”
***** “Clear Your Schedule. You won’t want to put this down.”

Get it for only 99 Cents for a limited time!

In addition to writing captivating legal thriller novels, Mark writes a civil justice blog and co-hosts a weekly podcast, Journey into Justice. He has written articles for numerous publications and made guest appearances on radio and talk shows.

In his spare time, Mark enjoys traveling and spending time with his family. He and his wife Tobye, have four children and eight grandchildren.