You are here: Home / Books To Read / Beneath the Veil 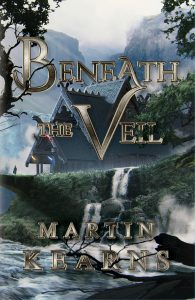 About Beneath the Veil:

In a battle between two ancient evils, can one naïve young man become the last hope against powerful creatures of legend?

David Dolan thinks he’s already got the world figured out. But when a collapsed bridge plunges him into the icy Hudson, he’s pulled deep into the deadly realm that exists between life and death. And with his earthly form trapped in a coma, he’s vulnerable to the horde of demons hell-bent on his utter destruction.

Traversing the road to the afterlife, David seeks the wisdom and skills he needs to fight the demonic forces reigning havoc on his allies above ground. But as one hellish threat closes in on his defenseless body, David must defeat another terrifying fiend waiting in the shadows to use him…

Can David escape the world beneath the veil in time to stop the bloodshed?

Beneath the Veil is the gripping first book in The Valor of Valhalla dark urban fantasy series. If you like reluctant heroes, infernal myths, and bloody epic clashes, then you’ll love Martin Kearns’s formidable foray into the unknown.

Author Bio:
I have been enamored with horror writing since I first picked up Winter Moon by Dean Koontz at the age of ten-quite the upgrade from Goosebumps, back then. The horror genre has transformed since I was a boy through the works of many authors who have blended horror into fantasy and science fiction, which makes me connect to newer works even more than all but a few of the classics.

Stories were my first love and during rare moments of quiet my mind turns toward those I’ve watched, read, and lived. They bring to mind possibilities, which are really where the seeds of a story begin. I truly hope to bring creative tales to readers who, like me, enjoy finding themselves lost somewhere in a world of endless possibilities.