You are here: Home / Books To Read / Belphegor: Chantecoq and the Phantom of the Louvre by Arthur Bernède 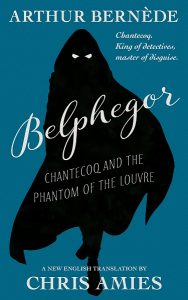 Belphegor: Chantecoq and the Phantom of the Louvre by Arthur Bernède

Another thrilling case for the mercurial and theatrical private investigator Chantecoq. King of detectives, master of disguise.

First published in 1927, and adapted several times for cinema and television, this is a brand new translation of Bernède’s classic novel of strangeness and crime. A tale of cunning disguises, narrow escapes, skullduggery, terrible poetry, and dogs.

This new translation, the first volume in the “King of Detectives” series, will be free to download from 24-28 October 2019.

Author Bio:
Arthur Bernède was a prolific French writer who was born in Brittany in 1871. The author of more than two hundred novels, he created popular characters including Belphegor, Judex, Mandrin and Vidocq, as well as Chantecoq, the ‘king of detectives’. Bernède died in 1937.

About the translator: Chris Amies was born in South London. He is a Languages graduate (French and Spanish), has a DipTrans in translating French to English and taught English as a Foreign Language in Greece before working for the British Civil Service, which he left in 2010 and now works in the community housing sector. His novel Dead Ground and its sequel Sea of Stone are available online. He has also been a regular contributor to Fantasy and Horror anthologies and further translations are planned.
He is a keen runner and interested in Tai Chi and Taoism.