You are here: Home / Books To Read / Battlefield Earth by L. Ron Hubbard 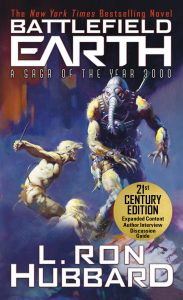 If you liked Dune, Atlantis Gene and Star Wars—you will love the book Battlefield Earth!

In the year A.D. 3000, Earth is a dystopian wasteland, plundered of its natural resources by alien conquerors known as Psychlos. From the ashes rises a young hero, Jonnie Goodboy Tyler. Spreading the seeds of revolt, Jonnie and a small band of survivors pit their quest for freedom in an all-out rebellion that erupts across the continents of Earth and the cosmic sprawl of the Psychlo empire.

“Pulse-pounding mile-a-minute sci-fi action adventure that does not stop. It is a masterpiece of popular adventure science fiction.” —Brandon Sanderson

Author Bio:
With 19 New York Times bestsellers and more than 230 million copies of his works in circulation, L. Ron Hubbard is among the most acclaimed and widely read authors of our time. As a leading light of American Pulp Fiction through the 1930s and ’40s, he is further among the most influential authors of the modern age. Indeed, from Ray Bradbury to Stephen King, there is scarcely a master of imaginative tales who has not paid tribute to L. Ron Hubbard.