You are here: Home / Books To Read / Batey Ascending 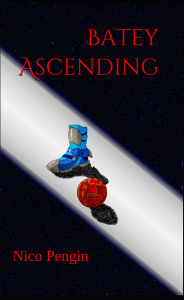 Inspired by Alita: Battle Angel, Harry Potter’s Quidditch game and the Tainos of the Caribbean.

Human life has a second chance to live after Earth’s destruction. Only a few made it to the spaceship. Nico, a young man with nothing to lose chose to reset his life and joined space migrants. Desperate to have an Earth-like life in this need-based environment, humans took their yearning and this new technology to get themselves into an entertainment renaissance. That’s how Batey became the sport of the new times.
This futuristic take on the ancient Taino game gave Nico the chance to make new friends, to have the family he deserved, and even reunite with who he never thought to see again. In his way to trying to make a name for himself in this sport, adversity knocks on his door. But heart and willpower are not enough to combat enhanced cyborgs and genetically modified humans.
What does it take for Nico and his friends to win the match?
Does he stand a chance to create his newfound dreams into reality? Or will he crumble at the hands of his nemesis, Fred.RTG?

Author Bio:
NicoPengin is a gamer tag that was inspired by a person that showed me how to play multiple sports when I was younger and the best way to honor him was to mix his name with Pengin. At the time I was signing up for Club Penguin, for those of us that remember, and I was not the best speller so the name just stuck and I have been using it ever since.
I have been an avid reader since my parents put a book in front of me, and I have been getting lost in the worlds of the words I read ever since. My imagination runs truly wild, as my favorite book series is Redwall by the late and great Brian Jacques, who wrote for blind children and used descriptions very vividly. And I am a very big fan of Eiichiro Oda’s One Piece, in his ability to create many story lines within one series as well.
I am currently in the process of creating a book series regarding my native heritage, the Tainos of the Caribbean.
In my free time I like to listen to music, play video games, workout, spend time with family and live life to the fullest.
But I write to give the world a story, layered and detailed. I have been writing since idk. No pets. I also play league of legends.