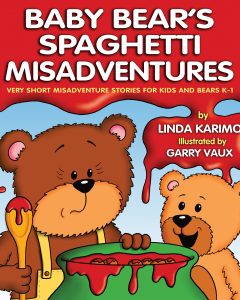 This one particular day when Mama Bear was cooking spaghetti and meatballs, Baby Bear bounced his ball against the cave wall.

Baby Bear knew it was on the forbidden list.

He did it anyway.

Mama Bear gave him the look.

He did it again.

Find out what happened to Mama Bear’s spaghetti dinner and naughty Baby Bear.

Back in the Stone Age, well maybe not that far back…
When Linda was very young, she learned to read at the knee of her Irish immigrant grandmother. Nannie, as she was known to the family, was just learning English herself. They read all the classic children’s stories together. There was one in particular that became the inspiration for Linda’s current series of children’s books.

Moving forward, Linda was always a ravenous reader. She would often read all the books by a given author and then go onto yet another great fiction author. Espionage, legal, medical, suspense, and some “who done it” were her game.

Her day job as a Copywriter paid the bills while she dreamed of writing an extraordinary series of children’s books.

So, what childhood story prompted Linda to write a series about those characters?
It was Goldilocks and the Three Bears. Linda’s nickname was always Goldilocks.
She transports her readers into the world of bears whose lives are not much different than humans, just bear style.

She has a conversational style of writing and wants her readers to feel a part of the action taking place, not just looking through the window watching it all going by.

Behind the Scenes Stuff About Linda Karimo

That would be country music at this point in my life. The artists and song writers tell stories that people can relate to in their day-to-day lives. I have been to countless concerts and music festivals and the only thing that is starting to bother me is thee increasing volume coming from the stage. It makes it more difficult to appreciate a ballad when the sound is at a reasonable level.

Also classical and opera have come to be important to me. My mother introduced me to these types of music at a young age. My favorite opera singer was Luciano Pavarotti and more recently Andrea Bocelli. Puccini, in my opinion was the most lyrical composer of opera music in particular La Bohème. Regarding classical, my preference is for composers that wrote music for the piano, namely Tchaikovsky with his Piano Concerto No. 1.

Cooking Is One Of My Passions
My passion has always been cooking. When being rushed just to put something together in a flash, this is not what I like at all. As for sweets, I leave that to others far more proficient with that plate on the menu. In particular my interest leans toward discovering different ethnic foods from around the world. On several holidays I would cook for a crowd always inviting someone who didn’t have a place to go to celebrate the day.

I don’t play an instrument at this point in my life. When I was young the accordion attracted me and I knew how to read music. Being visually impaired, I memorized all the tunes that I played.

As an adult I played keyboard, not the piano since my fingers are small and trying to reach an octave would have been painful. My ear was rather sharp enabling me to pick out the melody and relying on sheet music to give me the chord structure.
My Pet: My Friend

As a child we always had a cat roaming around the house. Decades later, a friend told me about a cat that had been abused and she knew that I was partial to those that are black and white. It was a match in heaven.

We were companions for each other during difficult moments and times of joy. He lived for almost 16 years and unfortunately I had to put him down before he reached that age. It was quite a month, first losing my best friend, burying my first husband and a day later putting down my Lumpycat.

People say that you should get another cat but it was not for me. We were just too close and I live my life now with his sweet memory.

15. What was the name of the last movie you saw?
My movie watching is not a current interest for me as I preferred some of the ones that were classics. My favorite one would be Sound of Music. I have traveled to Switzerland and Austria and my love of scenery makes this my favorite.

Titanic, Oh, God! Mr. Mom, Caddyshack, Silkwood and many others.

Lifetime full of love and compassion!