You are here: Home / Books To Read / At Any Cost: A Guide to The Transhumanist Wager and the Ideas of Zoltan Istvan 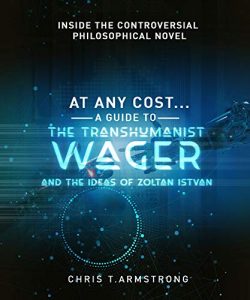 About At Any Cost: A Guide to The Transhumanist Wager and the Ideas of Zoltan Istvan:

The Transhumanist Wager is the controversial philosophical novel published by Zoltan Istvan in 2013. It was A Top 5 Amazon book; #1 Bestseller Science Fiction and Fantasy; #1 Bestseller Philosophy; and Winner Visionary Fiction – International Book Awards. It “tells the story of transhumanist Jethro Knights and his unwavering quest for immortality via science and technology.” In this guide, we will explore all aspects of its philosophy, characters, and plot, featuring insights from Zoltan himself, including:

* In-depth character profiles
* Transhumanist philosophical foundations: real-world and fictional
* Pitfalls of misinterpretation to avoid
* Timeline information
* Transhumania’s advanced technology and what made it possible
* Detailed analysis of Jethro’s speeches and dialogs with “questions to ponder” at the end of each section
* Jethro’s pre-war strategy
* Drivers of the post-war economic and technological boom
* Nietzschean connections
* Philosophical, thematic, and stylistic kinship with Ayn Rand’s Atlas Shrugged and The Fountainhead
* Transhumanist libertarian vs. techno-progressive perspectives
* Parallels with real-world proto-transhumanist, FM-2030
* Materialistic vs. Spiritual Transhumanism
* and more…

Author Bio:
A former software engineer, Chris T. Armstrong now writes about transhumanism and related topics. He has been published by IEET, Humanity Plus Magazine, and the India Future Society, among others. He recently contributed a chapter to The Transhumanism Handbook published by Springer, edited by Newton Lee. Mr. Armstrong’s first book is titled At Any Cost: A Guide to The Transhumanist Wager and the Ideas of Zoltan Istvan. Mr. Armstrong studied computer science at Arizona State University, focusing on artificial intelligence, and studied ethnomusicology/systematic musicology at UCLA. He has a BFA and MFA from California Institute of the Arts in World Music. Chris lives in Kansas City, Missouri with his wife Mary and their two dogs.