You are here: Home / Books To Read / Another Fairy Bastard by Ron Randall 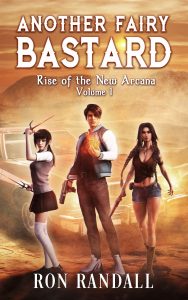 About Another Fairy Bastard by Ron Randall:

College prepares you for many things, and the Army even more, but neither prepared Dalton Graham for the murder that occurred across the hall, or the fact that he was its intended victim.

Assailed and assaulted by inhuman, magic wielding villains who want nothing more than his death–he goes on the run, protected by the mysterious and lethal Umi Nitaku, who is equal parts shy stranger and beautiful angel of death.

As they flee from one danger to another, he begins to discover the arcane ability that is his birthright, and the reason why it has entire houses of the Fairy united against him.

He will need all his courage and cunning if he is to avoid a violent death and a shallow grave.

If you like the snarkiness of Kevin Hearne’s Iron Druid series, the romantic angst and powerful female characters in Kim Harrison’s The Hollows, or the resourceful wizard in the action packed Dresden Files by Jim Butcher; then you are sure to love Dalton Graham in Another Fairy Bastard.

Author Bio:
Better known for being an awesome father, devoted husband, impassioned employee, and candidly, being way too impressed with himself; Ron Randall has been in love with words from a very early age.

He whiled away entire seasons exploring the worlds of Tolkien, Donaldson, Kurtz, Eddings, Anthony, Aspirin, Resnick, Silverberg, Harrison and too many more legends of the genre to count. When he first put pen to paper, however, it was creating intelligence studies for US military and political leaders, when US troops were getting deployed to hot spots around the globe.

When not spending time with his family he enjoys reading, writing, movies, music, travel and the company of other smart-asses.

He was born in California, raised in Michigan, served his country as an intelligence analyst in the US Army, attended college at San Diego State, and somehow, after all that, found himself a Hoosier, and decided he liked it. Must be something about corn and cows…