You are here: Home / Books To Read / American Emerald by David Snow 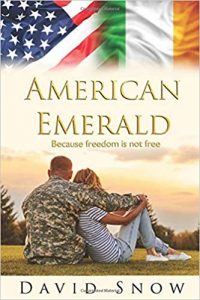 American Emerald, a coming of age story of love and war in the modern era, combined with the ancient Irish legend of Gartan clay and its protective powers.

19 year old Daniel Flynn from Donegal, Ireland is about to embark on his dream of joining the US Army. A direct descendant from the O’Floinn clan, legendary holders of the ancient celtic legend of Gartan clay.

The story commences the week before Daniel leaves the safe haven of Donegal for hi straining in Fort Benning, when his life changes forever with the chance meeting of Sandy, a young tourist from Texas. However duty calls as Daniel must leave for the killing grounds of Afghanistan, as freedom demands a heavy price.

“The vivid imagery makes one feel like they are walking on the beaches of Ireland, running up hills in boot camp and facing battle with comrades” Amazon Review

Reduced in price to $2.99 for limited period

Buy the book, and follow the author on social media:
Get This Romance Book From Amazon.

Author Bio:
David lives in Dublin, Ireland with his wife, two daughters and a dog. He has written three books and a screenplay all of which are available here on Amazon in Kindle and Paperback. A former Pinkerton Detective winning International Awards for his investigation skills in North America and Europe Middle East & Africa.

He has lectured extensively in both America and Europe on identity theft, fraud and has been interviewed on live television and radio. He is also a supporter of the charity A Little Lifetime Foundation, which supports parents whose babies die at the time of birth.