You are here: Home / Books To Read / American Brush-Off by Max Willi Fischer 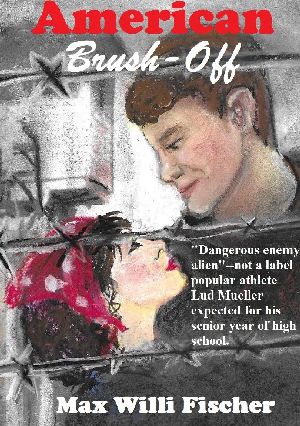 It’s 1942, and seventeen-year-old Lud Mueller is an All-American boy. He’s got it all—looks, athletic ability, popularity and the sweetest girl between Chicago and New York. Now, the only country he’s ever known has a plan to tear his life to pieces without giving him a fighting chance. The clouds of fear have gathered into the storms of bigotry throughout the United States. Innuendo has replaced due process.
Labeled a “dangerous enemy alien” in his hometown, Lud Mueller learns his deliverance depends upon his wit trumping his brawn. Interned in the Texas desert, he and his family become pawns in a secret World War II strategy. This isn’t what he expected for his senior year of high school.
While a few Nazi wannabes try to make life miserable for him and his family, Lud finds romance in the Texas heat only for it to be scorched by the government.
When the war ends, Lud has changed, but the government’s wishes for him have not.
The separation of families by our government is not a new concept. American Brush-Off is based upon the internment of thousands of legal German aliens and German Americans during World War II.
American Brush-Off is on sale for .99 in the Amazon Kindle format from April 16 through April 20.

Author Bio:
Born into an immigrant family, Max Willi Fischer was raised in a village named after an exotic North African seaport—Mogadore, Ohio. With that type of background, no wonder he grew up with an innate love of history. A four-decade teaching career convinced him that history should be a vibrant, well told story, not the dry sawdust of textbooks.
Retired, Max lives with his wife and trusted four-legged companions Cooper, Lucy, Bunnie, and Izzy.