You are here: Home / Action & Adventure / A Sharp Edged Truth by Scott Jones 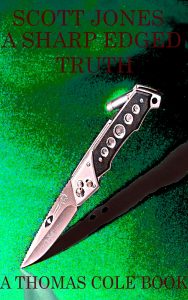 About A Sharp Edged Truth by Scott Jones:

A teenager is shot by police in a small Kansas town. The authorities call it a good shooting, open and shut. But the boy’s sister is an Army widow and ex Army Ranger Thomas Cole is asked to look into the inconsistencies. Tom and his mentor Martin Crow travel to the town of Willow Springs and begin asking the right questions of the wrong people. With the help of some of the town’s concerned citizens they uncover secrets that people in power are willing to kill to protect.

Author Bio:
I am a military veteran, a karate instructor, a father, and a grandfather. I began the Thomas Cole series of books while my son was serving in the 75th Ranger Regiment. He wanted a series with an ex-Ranger as the hero.
Ten percent of the profits go to the Army Ranger Lead the Way Fund, a non-profit that supports disabled U.S. Army Rangers and the families of Rangers who have died, have been injured or are currently serving in harm’s way around the world.