You are here: Home / Books To Read / A Knight’s Heart by Nicole Rayne 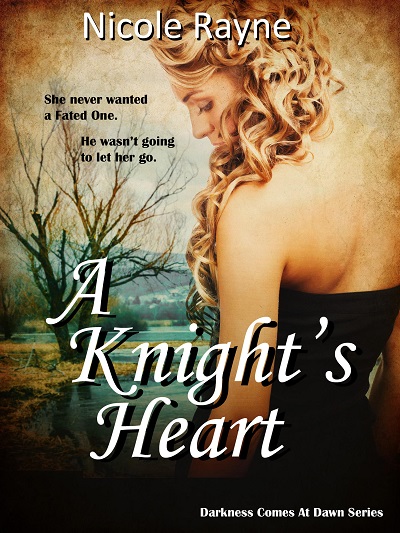 A Knight’s Heart by Nicole Rayne

She never wanted a Fated One…

As a Shinigami, Drea’s life revolves around one thing: taking the Souls of her targets and bringing them to Hell. However, her newest mission is going to test her in ways she never thought possible. Not because it’s going to be hard, but because she is forced to bring along a companion who is blackmailing her. Oh, and he stole her only weapon: her Scythe.

Then he showed up and changed everything…

Edward, a Rank IV Blood Contractor, has only one purpose in life: complete contracts within their non-negotiable time frames. With his latest contract being for a Shinigami named Drea, he’s almost bored at how easily he’ll execute this one. But after their first encounter, he quickly realizes that this may be the one contract he fails. The result of a failed mission is death.

Learning that they are Fated, Drea flees which causes Edward to use underhanded tactics to force her into letting him join her next Soul capture. Infuriated but out of options, she allows this. Forced together by Fate’s machinations, the pair must travel to another dimension littered with traps designed to kill them. Seduction and revelations pave the way towards an uncertain future.

Will Edward kill Drea, completing his contract, and live an eternity without her?

Or will he accept his Fate and give his life to save hers?

Buy the book, and follow the author on social media:
Learn more about the writer. Visit the Author’s Website.
Get This Paranormal Romance Book From Amazon.

Author Bio:
Nicole Rayne was born in Toronto, Canada, where she currently lives with her three cats. Raised by semi-overprotective parents, she developed an overactive imagination at a young age. This would come to be the foundation of her writing life.

She dropped out of university after two years which did not stop her from pursuing a self-publishing career. In 2019, she published her first novel, A Knight’s Heart, the second and third following shorty after only a few months between each one.

Author of the paranormal romance series: Darkness Comes At Dawn.

She shows no signs of stopping…