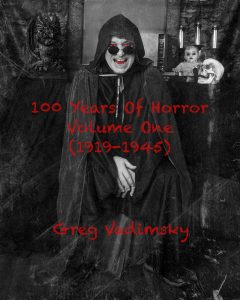 A first-of-its-kind chronological history of feature HORROR films, beginning at the end of the Spanish Flu and World War I. This first volume details the day-to-day history of the world, comparing the most significant historical happenings with the actual release dates of the initial groundbreaking films of the genre. It is a no-holds-barred accounting of the films, production histories, biographies, and world events that influenced the development of this new art form. Featured personalities include Lon Chaney, Bela Lugosi, Lionel Atwill, Boris Karloff, Claude Rains, Basil Rathbone, Dwight Frye, Peter Lorre, John Carradine, Lon Chaney Jr., Vincent Price, and many more!!!

Author Bio:
Greg Vadimsky’s love of horror films began in Melbourne, Florida, guided by his maternal grandmother Sophia Tosco (Kostreba), who introduced him to “Creature Features” and “Fright Theater”. These weekly programs were broadcast on Channel 44 out of Tampa/St. Petersburg, and hosted by the legendary “Dr. Paul Bearer”. Every weekend featured a walloping of classic horror films, broken up only by building Aurora monster models out in the garage (and likely, inhaling too many Testors glue fumes….)

His first book, 100 Years of Horror Volume 1 (1919-1945) is a chronological, historical accounting of important events that dovetailed into feature horror films. Often, reality was based on art, and seemingly, vice versa.

Greg is also a lifelong classically-trained musician who has performed throughout the world. He has also produced feature films, and continues to look forward to “all things creative”. He produces many studio recordings and can be seen live in various acts, with about 150 shows per year.